A downloadable game for Windows

After receiving  a message from your uncle,  you make your way to Milton Town. You have been asked to take care of his property for 30 days until he returns.

Download contains My Part Time Lover.zip - Please unzip the  folder before playing! Comes with a Wallpaper in the game file.
A dating game made  with RPG MAKER MV. For WINDOWS only!

(18+) Please note, this story contains explicit scenes and is for adult only!

-Cannot find Pudgy_1.png error.
-Night Event and swapping of NPC's from night to day. Fixed.
-Random access of bulletin board event for certain NPC's before triggering the quest from the bulletin board. Fixed.
-Fixed a small bug when playing the arcade machines that doesn't trigger at times.
Day 6 to 9 Notification pop up for Griff.  Ricky unavailable to find on Day 9,  Fixed
- Day 13 Daz Event at the bar does not trigger. Fixed!
- Day 7 - Ricky is still at the Convenient Store during the night. Should only be during the day. Fixed
- Removed Ziggy at convenient store during the night, fixed.
-Removed Pander while triggering  a Daz event during the day. Fixed.
Day 8. Leon notification error for bulletin board quest. Fixed.
-Leon Choice Route at antique store bug, when selecting option 1. Quest for searching him becoms active. This is incorrect and is fixed.
-Daz Bakery Events, sudden pause of the character preventing from moving but music and other moving animation is still functioning. Most likely due to conflicting events. Fixed

For those who purchased the game, these errors will hinder your game play. Please download the game again. You may take your old save data from the previous game and move it to the fixed game. The fixed bug may not apply to your saved game, if this is the case you may have to start again or load a older save file if the error persists.

Spoiler Alert - For those who want to play easy and casually here's the full guide to each characters route. Please be aware you can only date one character at a time, replay-ability is available after completing a route and saving.
FullGuide

In order to download this game you must purchase it at or above the minimum price of $12.99 USD. You will get access to the following files:

hey, i buy the game but it cant run on my notebook, can i heve a reimbursement?

so uhm... i really need this money back, can u reply

Hello! Sorry to hear you're unable to play this on your notebook.
In order to refund the payment could you please let me know the date of the purchase and the first 3 letters to your paypal e-mail and if it's .com or .co.uk. - I wouldn't want to accidentally refund the wrong person. Thank you.

Done, and refunded. If you're unsure with the games working on your notebook please download the demos available on my page before purchasing the game. I wouldn't want that to happen again in the future :)

in Leo's route on day 10 I dont get the quest for the alpha badge from the bulitin board? What am I doing wrong? It just says that there is nothing for now.

where can I find some clothes???

Is there a guide to the Puzzle Sets anywhere? I'm missing one piece from Puzzle Set 2 and and half of Puzzle Set 3 and I don't know which pieces I got from where because I started a New Game+ after I don't even know how long...

is there another way to buy the game other than paypal?

For some reason I can no longer save my game. I'm stuck at day 6. When I try to save, I get the error sound for the save confirmation.

A little confusen along the way but it was worth it Griff talks about being your boyfriend before he asks you if you talk to him right after the market. I'll be looking for the last few puzzles. I hope Griff gets a scene like Daz did with set 1.

i found the cat on leon route but wheres the staff?

Reply
Akro Is Cure169 days ago

where is puzzle pieces three for Leon scene.

Check your Library/downloads. It should be in there.

Can anyone tell me how to get all puzzle pieces and posters, cause i'm missing a few, thanks!

In 12 day. I already talk Griff and looking for Ricky.Then i went to Ricky's school and talk npc and he said run towards to museum. But i can't find him anywhere. I already  search abandon old house and look everywhere. But still no luck find him.

Hi, try searching for him at the abandoned house on day 13.

Thank you for your help Bara!

I've finish all the character. The story and the feeling its really amazing! Griff,Daz and Leon are the best lover! Do you have plan make My Part Time Lover 2 in the future? I really love it so much!

Hi, unfortunately there wont be a No.2 for this project but I'm glad you had much fun with the game!

Aww thats really sad. Well i really enjoy this game so much. I can't wait buy another new game of your vn! Take your time Bara!

Hi, I will most likely not be making another VN again. If anything I'm currently working on this and might be my last project, but who knows! https://bara-diction.itch.io/my-time-at-etheria-demo

where can i find the ring?

Bulleton board said lost on the way to the pier.

Left side of the ice cream machine.

or at least give me instructions please

p.s is their any in the gym or jumba

It's not the vending machine you need it's the grey door that's on the top right.

Library book? I dont remember this being part of leon's route.

I think its 5 strength

Hey Bara! (can I call you that?) I saw your comic 'Let Me Fix It!' and I absolutely LOVE it! I'm someone from a different country that doesn't have dollars. Will you be releasing this for free anytime soon?

Hi there! Sure bara is fine. Unfortunately i won't be releasing a free version for this since it helps with other future projects.

Where is the bag located for the billboard missions on Leons route?

Its the old couple sitting outside the bakery during the day.

Do you know where the ring is near the pier by any chance?

What is the difference between the version you can purchase here and the "gold version" on patreon?

No difference, Patreon is for those that have contributed and supported my project. That said my patreon is mainly for art initially but working on the game was part of a bonus.

you get    the baking stuff and i talked to the guy who is looking for other parts of his recipe.

iv  got all the posters what do you do with them?

Each poster has a clue on them which leads to getting the puzzle piece set 3.

Are there plans on making this game available for mac users?

Unfortunately it is required to have a Mac when deploying for Mac users to play, unfortunately I do not owe one so I won't be releasing this for Mac.

Have a look at the cars in the school parking lot, you should find it around there

I think I encountered a bug with the Summoner Hero Card. I summoned an earth slime and after the battle the game still thinks the slime is in my party. For some reason this completely messes up my controls in the map and when I change locations I'm teleported one tile before I should teleport. Playing the card machines and letting the minion die doesn't help any.

EDIT: I think I know why the controls are a bit messed up. The game thinks I'm controlling the slime in the map, and since it doesn't have a sprite in the map, it's invisible, but it's there and my character is just following 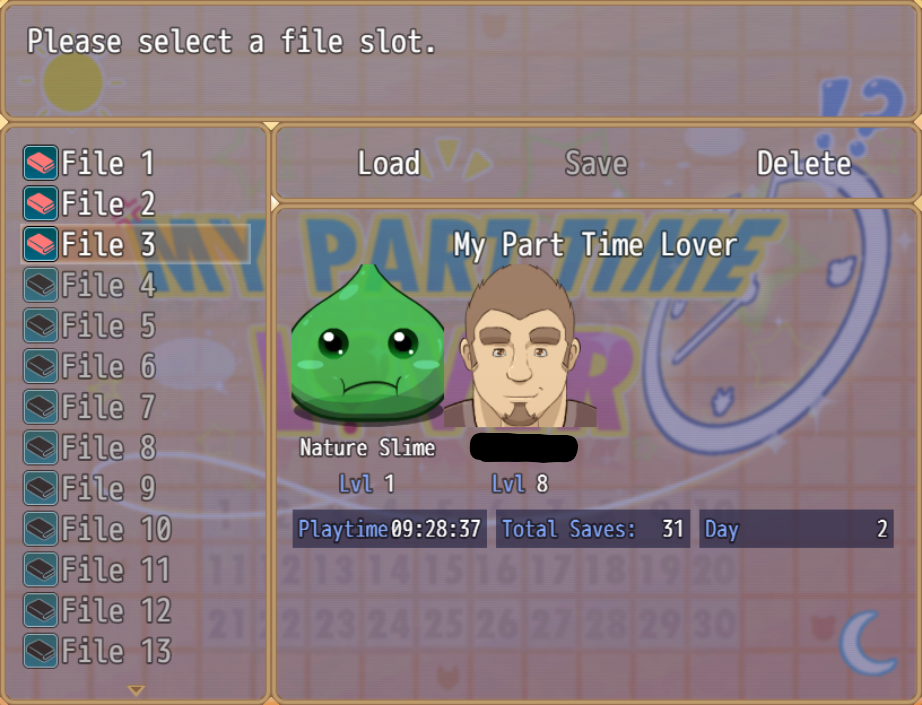 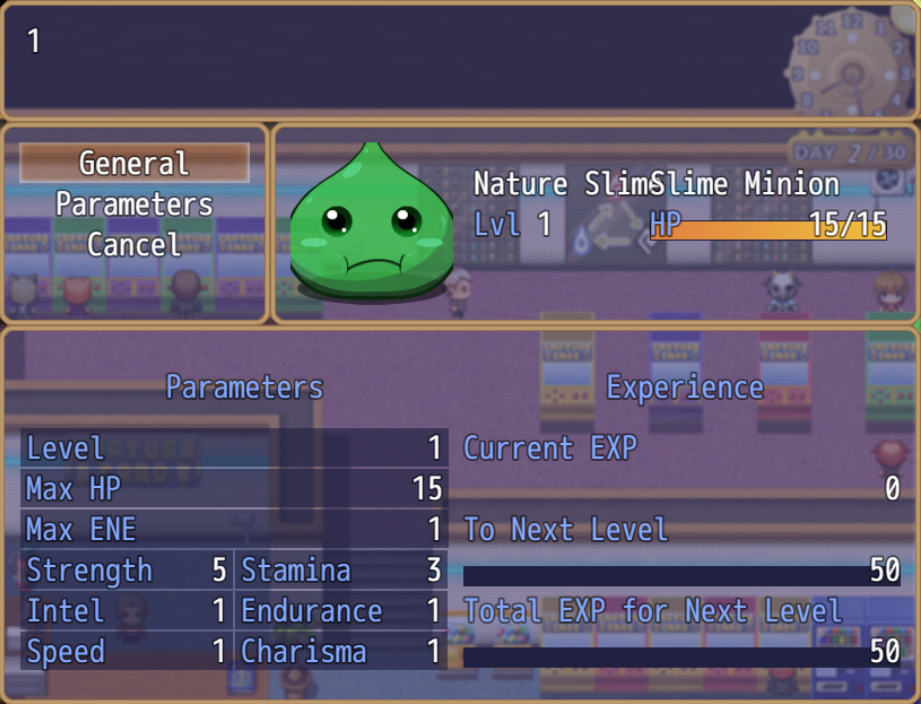 Hi there! Thanks for letting me know about this bug, I will look into this further.
Was this perhaps the summoning Hero card? Or was it the Summoning Support Card?

I only encountered this bug with the summoning Hero card, the support card seems to work just fine, at least as far as I can see

How do I find the lost cat for Leon's route?

I'm only missing the carrot cake recipe... Is that one of the random ones you receive from working 5-hour shifts at the bakery? If so, I guess I'm super unlucky.. ha. :)

Uhh, did I do something wrong? It's still not letting me have the third picture. 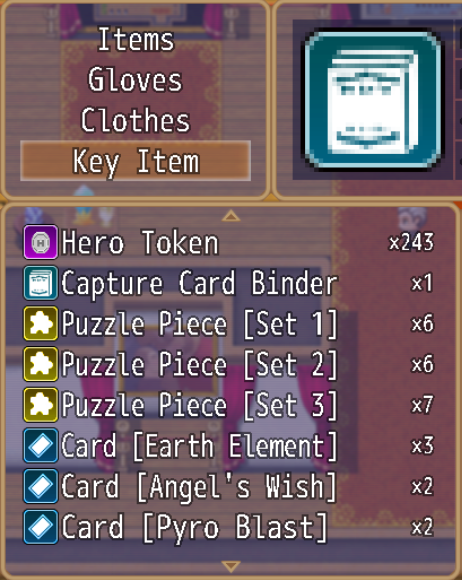 Oooooh, thanks. Sorry, I suppose I missed that part

How do I raise intelligence past 6

Play the invisible maze game next to the library otherwise do the bulletin board from the polie station (Bulletin board is linked to Leon's route).

How do you increase Charisma?

After 6pm, work at the bar.

How do u obtain blue fruit for office clerk?

Go to the small stand outside next to the police station. Buy the blue fruit seeds, go back home and plant them into one of the three pots, buy water and water it everyday. 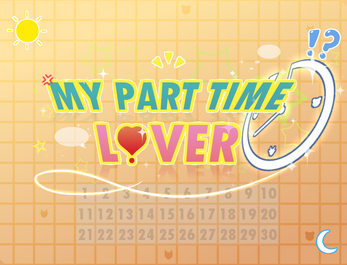 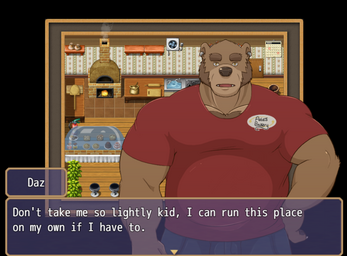 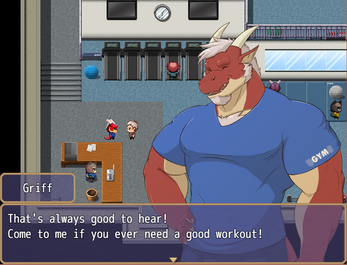 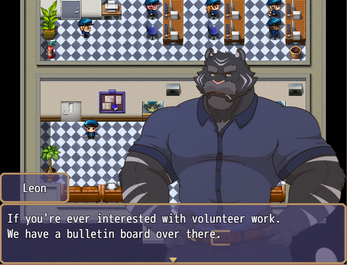